The reason you don’t see lots of new Tolkeinesque stories of halflings and dwarves and elves in the book stores is that those things have been done. Most people want something new. It isn’t that dwarves and elves and halfllings can’t be used in stories any more, it’s just that if you use them, you probably need to re-invent them in some unexpected–even iconoclastic–way in order to make them fresh again for the reader.

One could argue that the genre of urban fantasy is largely the result of just such a need for newness and rethinking.  Black Blade Blues comes to mind, with its investment-banker dragons–what a wonderful re-imagining that is! (Who are the hoarders of gold today–the symbols of greed–if not the Gordon Geckos?)

I recently took my kids to the wonderful Crest Cinema to see the animated film, Rise of the Guardians, in which the artists reimagined the all too familiar figures of Santa and his elves. How did they reinvent them?

Santa became a burly, tattooed Russian with a rolling Russian accent, a huge rough laugh, and the words Naughty and Nice tattooed on his massive forearms.

His “elves” were replaced with teams of huge and hairy yeti, who were responsible for all the toy making (as well as any fistfights that needed staffing).

Okay, there were elves present–the standard cliche elves with tiny bodies, cute faces and pointy ears and hats–who laid about (drunk, in my memory) and idle, as a kind of window dressing, but even that was a reinvention of elves. 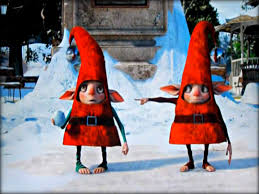 As a result, the old tropes were again fresh and entertaining, and in some cases can even cause us to question our assumptions about the familiar (do Russians have a different idea of Santa?).