The Muse of Invention

One of the best things about speculative fiction is the joy of pure invention, riffing off of  patterns we see in the Nature. The florescent flora of Miranda, in Avatar, comes to mind–stunningly beautiful, inspired perhaps by some of the bio-luminescence of the sea. 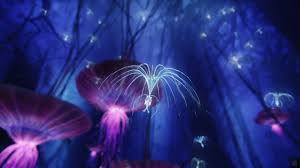 Michael Swanwick’s Stations of the Tide

Here is a passage from Stations of the Tide that I thought beautiful, inspired perhaps by the symbioses we see among sea creatures–from whales to crabs–like barnacles, remoras, and whale lice.

The orchid crabs were migrating to the sea. They scuttled across the sand road, swamping it under their numbers. Bright parasitic flowers waved gently on their armor, making the forest floor ripple under a carpet of multicolored petals, like a submarine garden seen through clear fathoms of Ocean brine.

In the late 90s I lived in Charlottesville, Virginia, where I did some contract writing for the guys at Iron Crown Enterprises, the creators of the wonderful Role Master fantasy role-playing system.

At the time they were designing a game world for a new series of modules, and the game designer, John Curtis III, mentioned something that struck me as odd at the time and so it sticks with me today.  After explaining to me the intricacies of the world’s cosmology–how his world and it’s peoples were created by what gods and for what purposes–he said, “but that’s just half of it. Now I have to figure out how each of those peoples think the world was created and by whom for what purpose. None of the mortals would know the real story, only nuggets of truth here and there.”

I think of that as the “Through a glass, darkly” principle in worldbuilding. Even Christianity, which claims to be the sole true religion in this world, doesn’t claim that humans are capable of full understanding of the divine in this life. Of this world and the next Saint Paul wrote, “We see now through a glass darkly, but then we shall see face to face.” Likewise the mortals of ICE’s game world were granted only a dim and muddled view of its cosmological reality.

If you go with that metaphor for your world, the people’s mythologies will  be only a shadow of what is actually going on, warped by human passions and frailties and limitations.

Playing with the Glass

Those warpings can be lots of fun.  They’ll show up in contradictory scriptural passages like “God is a jealous god”, “God is love,” and “Love is never jealous.”   (Wait, what?)  It will show up in confabulations of folklore and scripture, like some of the Jewish golem stories, and in outright imaginative superstition, like imbedding nails in the shape of a cross in the heel of your left boot to keep the devil off your trail, as Pap does in Twain’s The Adventures of Huckleberry Finn. Making up your own versions of that is plain fun.

The Curse of Chalion

One of my favorite examples of a secondary world designed upon the “through the glass darkly” principle is Lois McMaster Bujold’s Curse of Chalion universe.  The gods in that world are very present but so inscrutable as to seem arbitrary at times, remote beyond human understanding. In books like that, I feel I’m being made to examine life and spirituality from a new angle, and I value that. But just as important is the simple verisimilitude of such crafting; it resonates with the way humans experience the divine in –through a glass, darkly–and thus brings credibility to the world.

Of course, you might well decide to create a world in which the gods live in the temples among their priests, and if there is any dispute in doctrine the priests simply ask the god, who settles it definitively.  (Such a world presents an entirely different set of challenges.)